Taming the asynchronous beast with ES7

One of the trickiest aspects of PouchDB is that its API is asynchronous. I see no shortage of confused questions on Stack Overflow, Github, and IRC, and most often they stem from a misunderstanding of callbacks and promises.

We can't really help it. PouchDB is an abstraction over IndexedDB, WebSQL, LevelDB (in Node), and CouchDB (via Ajax). All of those APIs are asynchronous; hence PouchDB must be asynchronous.

When I think of elegant database APIs, however, I'm still struck by the simplicity of LocalStorage:

To work with LocalStorage, you simply treat it like a magical JavaScript object that happens to persist your data. It uses the same synchronous toolset that you're already used to from working with JavaScript itself.

For all of LocalStorage's faults, the ergonomics of this API go a long way to explain its continuing popularity. People keep using LocalStorage, because it's simple and works exactly as expected.

For PouchDB, we can try to mitigate the complexity of asynchronous APIs with promises, and that certainly helps us escape the pyramid of doom.

However, promisey code is still hard to read, because promises are basically a bolt-on replacement for language primitives like try, catch, and return:

As JavaScript developers, we now have two parallel systems – sync and async – that we have to keep straight in our heads. And this gets even worse as our control flow becomes more complex, and we need to reach for APIs like Promise.all() and Promise.resolve(). Or maybe we just opt for one of the many helper libraries and pray we can understand the documentation.

Until recently, this was the best we could hope for. But all of that changes with ES7.

What if I told you that, with ES7, you could rewrite the above code to look like this:

And what if I told you that, thanks to tools like Babel.js and Regenerator, you can transpile that down to ES5 and run it in a browser today?

Please ladies and gentlemen, hold your applause until the end of the blog post.

First, let's take a look at how ES7 is accomplishing this amazing feat.

If the promise resolves, we can immediately interact with it on the next line. And if it rejects, then an error is thrown. So try/catch actually works again!

This allows us to write code that looks synchronous on the surface, but is actually asynchronous under the hood. The fact that the API returns a promise instead of blocking the event loop is just an implementation detail. 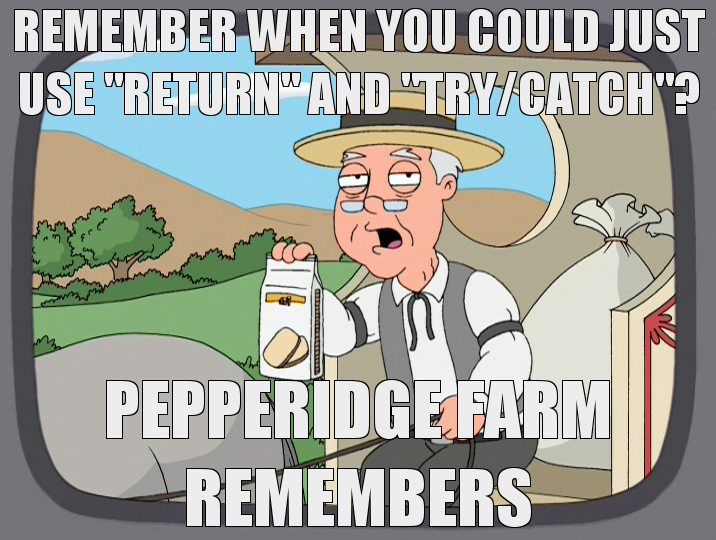 And the best part is, we can use this today with any library that returns promises. PouchDB is such a library, so let's use it to test our theory.

First, consider a common idiom in PouchDB: we want to get() a document by _id if it exists, or return a new document if it doesn't.

With promises, you'd have to write something like this:

With async functions, this becomes:

Much more readable! This is almost the exact same code we would write if db.get() directly returned a document rather than a promise. The only difference is that we have to add the await keyword when we call any promise-returning function.

There are a few subtle issues that I ran into while playing with this, so it's good to be aware of them.

First off, anytime you await something, you need to be inside an async function. So if your code relies heavily on PouchDB, you may find that you write lots of async functions, but very few regular functions.

Another, more insidious problem is that you have to be careful to wrap your code in try/catches, or else a promise might be rejected, in which case the error is silently swallowed. (!)

My advice is to ensure that your async functions are entirely surrounded by try/catches, at least at the top level:

Async functions get really impressive when it comes to iteration. For instance, Let's say that we want to insert some documents into the database, but sequentially. That is, we want the promises to execute one after the other, not concurrently.

Using standard ES6 promises, we'd have to roll our own promise chain:

This works, but it sure is ugly. It's also error-prone, because if you accidentally do:

Then the promises will actually execute concurrently, which can lead to unexpected results.

With ES7, though, we can just use a regular for-loop:

This (very concise) code does the same thing as the promise chain! We can make it even shorter by using for...of:

Note that you cannot use a forEach() loop here. If you were to naïvely write:

Then Babel.js will fail with a somewhat opaque error:

This is because you cannot use await from within a normal function. You have to use an async function.

However, if you try to use an async function, then you will get a more subtle bug:

This will compile, but the problem is that this will print out:

What's happening is that the main function is exiting early, because the await is actually in the sub-function. Furthermore, this will execute each promise concurrently, which is not what we intended.

The lesson is: be careful when you have any function inside your async function. The await will only pause its parent function, so check that it's doing what you actually think it's doing.

If we do want to execute multiple promises concurrently, though, then this is pretty easy to accomplish with ES7.

Recall that with ES6 promises, we have Promise.all(). Let's use it to return an array of values from an array of promises:

In ES7, we can do this is a more straightforward way:

The most important parts are 1) creating the promises array, which starts invoking all the promises immediately, and 2) that we are awaiting those promises within the main function. If we tried to use Array.prototype.map, then it wouldn't work:

If you don't mind using Promise.all, you can also use it to tidy up the code a bit:

Presumably this could look even nicer if we used array comprehesions. However, the spec isn't final yet, so it's currently not supported by Regenerator.

ES7 is still very bleeding-edge. Async functions aren't supported in either Node.js or io.js, and you have to set some experimental flags to even get Babel to consider it. Officially, the async/await spec is still in the "proposal" stage.

Also, you'll need to include the Regenerator runtime and ES6 shims in your transpiled code for this to work in ES5 browsers. For me, that added up to about 60KB, minified and gzipped. For many developers, that's just way too much to ship down the wire.

However, all of these new tools are very fun to play with, and they paint a bright picture of what working with asynchronous libraries will look like in the sunny ES7 future.

So if you want to play with it yourself, I've put together a small demo library. To get started, just check out the code, run npm install && npm run build, and you're good to go. And for more about ES7, check out this talk by Jafar Husain.

Async functions are an empowering new concept in ES7. They give us back our lost returns and try/catches, and they reward the knowledge we've already gained from writing synchronous code with new idiioms that look a lot like the old ones, but are much more performant.

Most importantly, async functions make APIs like PouchDB's a lot easier to work with. So hopefully this will lead to fewer user errors and confusion, as well as more elegant and readable code.

And who knows, maybe folks will finally abandon LocalStorage, and opt for a more modern client-side database.